“Philip Suiter, Legendary Riverboat Pilot” in the River Pilots’ Pier area of the museum. Philip’s descendants have sponsored the display that features Philip Suiter, the first riverboat pilot in LeClaire. DETAILS and photos of the Exhibit 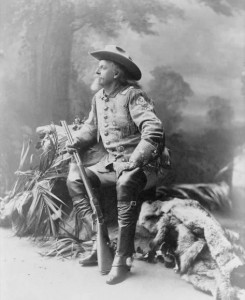 William F Cody “Buffalo Bill” (1846 – 1917) was born in LeClaire, IA. His career as a frontiersman, US Army Scout, and later as a showman touring throughout the United States and Europe with his “Wild West Congress” show, has made him a favorite figure among the many generations of visitors to the museum.

Professor James J. Ryan II, “Crash Ryan” (1903-1953) was a 1920 graduate of the LeClaire High School, later attending Iowa State University, and teaching at the University of Minnesota. As a professor, he tested automobile safety equipment ranging from a hydraulic bumper to seat belt designs (thus the n

ickname “Crash Ryan”). He is most famous as the inventor of the Ryan Flight Recorder in 1972, or the “Black Box” of which there is one displayed in the museum.

James B. Eads (1820 – 1887) was a self-taught engineer who included LeClaire, Iowa as one of his hometowns over the course of his lifetime. His gunboat designs include the Civil War’s “Iron Bells” which were the precursor of today’s modern submarines. However, he is best known for the Eads Bridge which spans the Mississippi River at St. Louis. His design was employed steel which was an unproven component in bridge design.

Cecil Fletcher (1918-2002 ) was a local musician and “favorite son,” having composed the “LeClaire Song,” the official song of the community in which the Buffalo Bill Museum is located. Along with a love of music, he was well-known for the miniature replicas of an old school house, church, and other buildings built to encourage the community to share his desire to preserve local history. The museum features a video performance of the “LeClaire Song” and has a number of his instruments on display.

Red Cross Quilt (1919) was a fundraiser to support the wounded soldiers of WWI. A 10-cent donation would allow volunteers to place your name on an embroidered patch on the quilt and be one of 834 people who contributed to the fundraiser. Other quilts are also on display in the museum, and details about construction is provided. 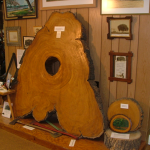 The “Green Tree Hotel,” the largest Rock Elm on record, was located at the start of the “Rock Island Rapids” at LeClaire, Iowa. It was a gathering place and campsite for river pilots and men seeking work on the river boats.

In 1912 it was entered in the “Hall of Fame for Trees” (when it was approx. 175 years old) because of its unique role in local history; in 1964 it succumbed to Dutch Elm Disease. A museum exhibit includes a cross section of this large elm, including its unusual hollow core.

The Lone Star Stern Wheeler (built 1869, retired in 1889. In 1890 a new Lone Star was built and decommissioned 1967) is the only surviving example in the United States of a wooden-hulled boat built in the traditional Western Rivers fashion. That river system, comprised of the Mississippi, Ohio, and Missouri Rivers carried most of the immigrants and freight that settled the Midwest. The Lone Star was designated a National Historic Landmark and is open to visitors at the Buffalo Bill Museum. The boat’s enclosure, The River Pilot’s Pier, has won a significant design award from the State of Iowa for its “green” design in 2008. NEW! The museum has added an exciting new reason for you to visit the Lone Star Steamer. A new sound system has been added to the River Pilot’s Pier building where the Lone Star is located. The new sound system allows you to experience the sounds of the steamer traveling on the river along with background sounds.

Other exhibits at the museum focus on Mississippi River history; artifacts and records of LeClaire families such as household items, clothing and personal effects; recreation of a one-room schoolhouse accompanied by records from the school serving the region’s families; manufacturing exhibits; Indian and prehistoric artifacts. 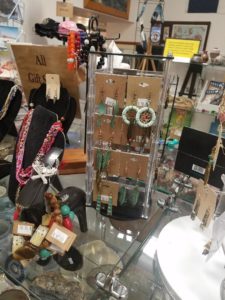 Tour groups can be accommodated outside of normal business hours, upon request.

When this happens, it's usually because the owner only shared it with a small group of people, changed who can see it or it's been deleted.
View on Facebook
· Share

Great popcorn! You can also buy it from Happy Joes. If you order a pizza for delivery and ask for popcorn they will deliver with the pizza. My favorite is the Carmel corn ... See MoreSee Less

WE ARE OPEN with limited hours so we can all have fun this New Year’s eve. Be safe watch for other cars and call (563)289-4070 to place an order. Cheesy potato soup, tenderloins, ice cream, burgers, french fries and more all available. ... See MoreSee Less

We are going to be closed on Monday’s in the month of January. We hope this doesn’t in convenient anyone. We will be open Tuesday through Saturday 10 am to 4 pm and Sunday’s noon to 4 pm. Happy New Year from all the volunteers at the Buffalo Bill Museum in LeClaire, Iowa ... See MoreSee Less
View on Facebook
· Share

‼️ Important ‼️Overnight there were reports and video evidence of individuals checking car doors and going through unlocked vehicles. PLEASE lock up your vehicles, valuables, garages, etc. And as always, if you notice any suspicious activity, call 911. ... See MoreSee Less