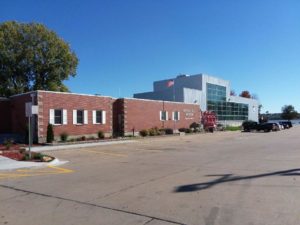 The Buffalo Bill Museum of LeClaire is organized and operated exclusively for educational purposes and to such ends is given the power to establish, to provide facilities for, to maintain and operate a museum to preserve early history, documents and relics pertaining to the Mississippi River, the Native American race, and William Cody, more commonly known as Buffalo Bill, early American life and settlers, and with particular emphasis to be placed on the relations of the above, and the connection with LeClaire Township and Scott County.

The Buffalo Bill Museum was established in 1957 by the LeClaire’s Women’s Club (now defunct), and was originally located in a store front on Cody Road (Hwy. 67) in LeClaire, IA. Its primary exhibits featured local river pilot artifacts, Buffalo Bill memorabilia, local Indian history, and items common to homes in the early 1800’s throughout the region.

In 1971 the first small museum building was constructed on the LeClaire Levee; later, in 2001 a 45 x 45 foot building addition was completed. Most recently, the River Pilots Annex was completed in 2008 to house the Lone Star Stern Wheeler.

The Lone Star was added to the museum’s collections in 1968, and later designated a “National Historic Landmark” (National Register # 89002461). It is the only surviving wooden-hulled vessel of its particular design.

The most recent update is our new one room school house exhibit built in 2018.

Today, the museum welcomes nearly 20,000 visitors a year from all over the United States and at least 20 foreign countries. It operates 7 days a week, primarily through the efforts of volunteers, and remains a popular tourist destination along the I-80 corridor.

Tour groups can be accommodated outside of normal business hours, upon request.

When this happens, it's usually because the owner only shared it with a small group of people, changed who can see it or it's been deleted.
View on Facebook
· Share

Great popcorn! You can also buy it from Happy Joes. If you order a pizza for delivery and ask for popcorn they will deliver with the pizza. My favorite is the Carmel corn ... See MoreSee Less

WE ARE OPEN with limited hours so we can all have fun this New Year’s eve. Be safe watch for other cars and call (563)289-4070 to place an order. Cheesy potato soup, tenderloins, ice cream, burgers, french fries and more all available. ... See MoreSee Less

We are going to be closed on Monday’s in the month of January. We hope this doesn’t in convenient anyone. We will be open Tuesday through Saturday 10 am to 4 pm and Sunday’s noon to 4 pm. Happy New Year from all the volunteers at the Buffalo Bill Museum in LeClaire, Iowa ... See MoreSee Less
View on Facebook
· Share

‼️ Important ‼️Overnight there were reports and video evidence of individuals checking car doors and going through unlocked vehicles. PLEASE lock up your vehicles, valuables, garages, etc. And as always, if you notice any suspicious activity, call 911. ... See MoreSee Less